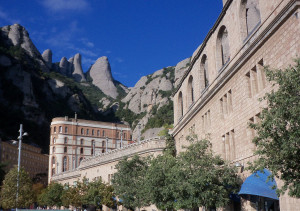 Of all of the side-trips we had considered prior to flying to Barcelona, the majestic area on top of craggy Montserrat (the “Serrated Mountain”) was the one I was most excited about. Looking at pictures of its Royal Basilica and Benedictine monastery in the center of intriguing, giant rock formations, I had to wonder if it could possibly be so spectacular in person. 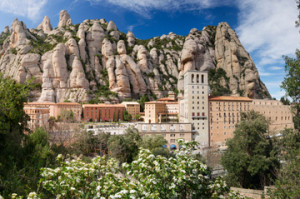 Of course I shouldn’t have worried. Montserrat more than lives up to its impressive reputation!

But first, let me back up a bit… We signed up for an upgraded afternoon tour through Viator, which included a 40-mile bus ride from Barcelona to half way up the destination mountain.

It then deposited us at the Monistrol station, where we caught a cog-wheel train that traveled up to an elevation of more than 4,000 feet. 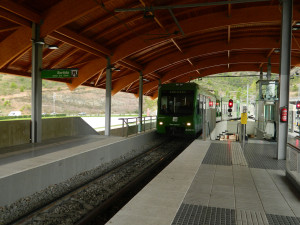 The vista views from the train’s large windows during our ascent were spectacular — at least for all but the last 10 minutes or so, when fog and rain rolled in. Still, this upgrade was worth the extra money and much better than just staying on the bus for the entire trip to the top.

Once we de-boarded, I stood completely still before slowly turning and admiring the full 360-degree view of this awe-inspiring locale. Even with the rain and the clouds and some remnants of fog, this was still a pretty wonderful site! 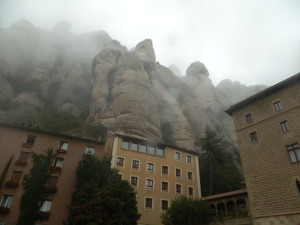 Our guide took us on a walking tour of the area, and explained the history of Monserrat as an important pilgrimage site for centuries, before taking us into the Royal Basilica. 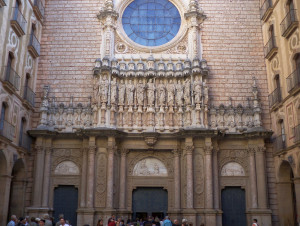 Once inside, we heard about the widely celebrated “Black Virgin” (or La Moreneta), a wooden carving of the Virgin Mary and Christ child that is black in color. Although some say that the statue was created in the 12th century, there’s another more interesting legend.

It says that in 880, a small group of shepherd children saw a bright light in the Montserrat mountains, along with music and angelic singing. They ran and got their parents who saw and heard the same thing, as did a local vicar. The visions led them to a cave, where religious elders found the Black Virgin statue, which had probably been hidden from invading forces.

The cave’s Holy Grotto has become a deeply spiritual place that the public can walk to along a steep trail. We didn’t have the time (or cooperative weather) to explore that trail, but were thrilled to step into the Basilica. 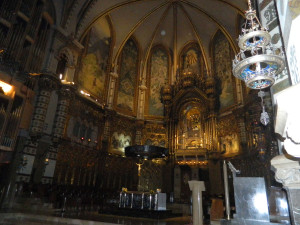 Many of our tour group members queued up to see the religious artifact close up, but the line was VERY long. Instead, I chose to walk down the side of the sanctuary towards the front and then aimed my camera straight up. The photos were a little out of focus, but at least I was able to see the famous icon. 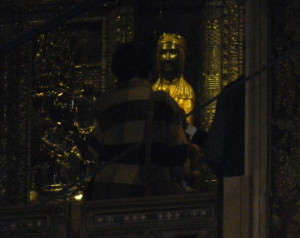 Interestingly, after “going to church,” we were then led to the visitor’s center for a tasting of 4 different liquors made in nearby distilleries. I wish I had gone ahead and bought a bottle of my favorite, which was called Crema Catalana of Montserrat. It had a sweet, creamy, nutty flavor that quickly warmed up my slightly rain-soaked self.

As we got ready to walk out towards the bus for our trip back to Barcelona, the clouds completely opened up and rained down hard drops on my completely demolished umbrella as lightning and thunder gave us a final goodbye.

I was thrilled to have gone but a little disappointed that I didn’t get to see the beautiful area on a nice day. However, my Mom made sure I got at least a few great, blue-sky pictures.

A few days later, I started my 4-day business conference while she went off for trips on her own. And one of those, which she’s going to guest post about tomorrow, started off with a quick stop at Montserrat! And of course it was a clear and sunny day. 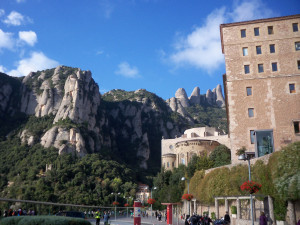 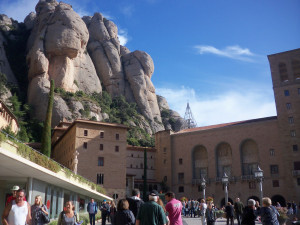 So these photos and the one at the top of this post are hers and yep, I’m pretty jealous. Especially because I now know that that famous song lied. You know, the one that says “the rain in Spain stays mainly in the plain…” Um, no it doesn’t.

Still, this is a trip worth taking no matter what the weather situation – declares this at-the-time waterlogged blogger! 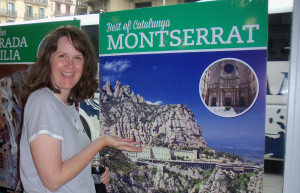