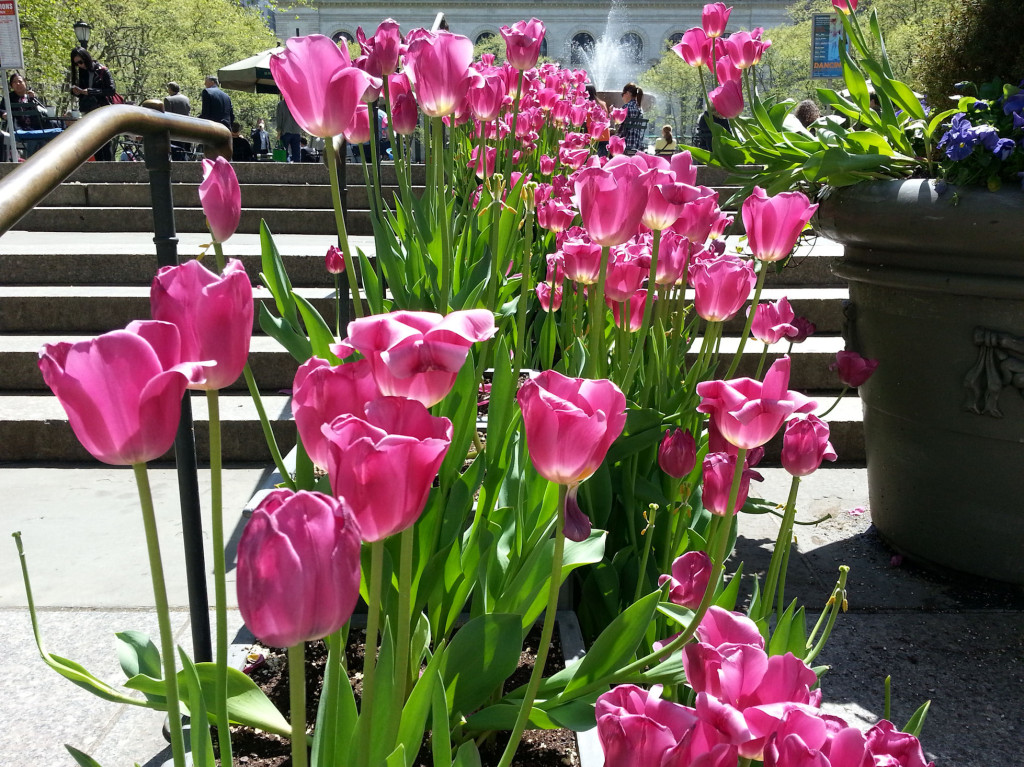 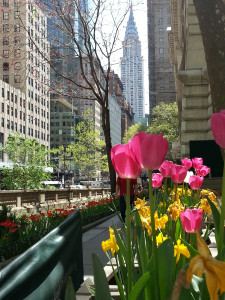 I had heard that tulips were in bloom all over the city and saw some for myself on my cab ride into the city earlier in the week. But the previously mentioned rainy weather and super busy convention work kept me from exploring sooner.

Finally, I had all morning on Wednesday to wander around before catching my flight back home in the evening. And I wasn’t about to waste any more time indoors.

So after a walk around the Garment District, which was near my hotel, I strolled over to Bryant Park. I have long loved this pretty little green area in the middle of a sea of skyscrapers, but I had never seen it all dressed up like this. 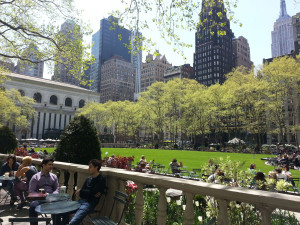 A beautiful day to hang out at Bryant Park 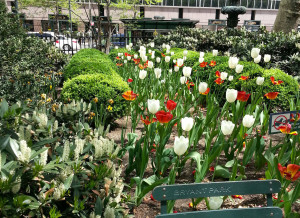 The colorful, beautifully planted flowers were everywhere, including along the west side steps near the fountain. 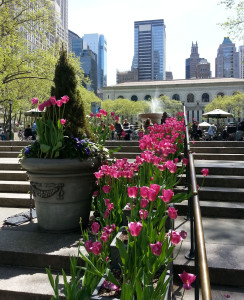 Even the flower-shaped trash cans made me smile. 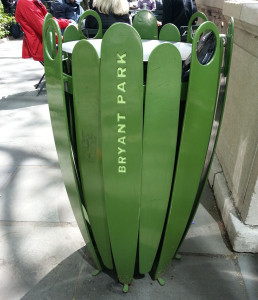 There was an event scheduled for later in the day, so the football-field-sized middle green section (known as “The Lawn”) was cordoned off. But there were still a LOT of people wandering around or relaxing.

After taking a short break to step inside the connected New York Public Library (I’ll be writing about it tomorrow!), I walked along the park’s south side, people-watching at the free games tables there and admiring the old time carousel — which is actually known as “Le Carrousel.” 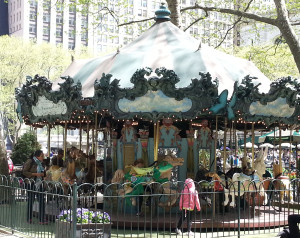 This was soooo tempting

Although the area was designated as a public property in 1686, and later became known as Reservoir Park, it was officially renamed Bryant Park in 1884 after long-time editor of the New York Evening Post, William Cullen Bryant. In 1974, it was designated as a Scenic Landmark and it was completely renovated by 1992. 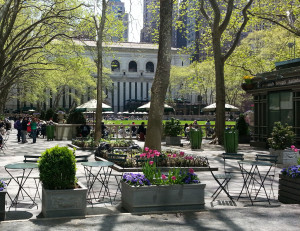 Another view of the beautiful park

Today, the 9.6 acre park is a super popular lunch spot during the week and a gathering spot on the weekends. It offers casual events such as juggling and fencing demonstrations, movies under the stars, and Piano in the Park and Shakespeare in the Park performances, as well as big-name concerts from stars such as Miley Cyrus and the Black Eyed Peas.

However, I prefer its calm and laid back days. Heck, it even has an outdoor Reading Room with chairs, tables, and carts of magazines and books all located in a shady nook! Or if you prefer to go online, the park is also a Wifi Hot Spot. 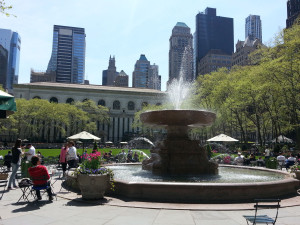 Yep, any time is great for a leisurely stroll through Bryant Park, listening to people talking and laughing, the fountain bubbling, and usually a musician or two quietly playing for tips. But it is especially wonderful when its flowers are in full bloom and putting on a show.

So if you’re in the area, go! Go now! It’s free, it’s beautiful, it’s interesting, and it’s a great spot for a break. What are you waiting for?? 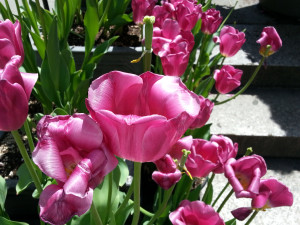 NOTE: Bryant Park is located directly behind the New York Public Library and is between 40th and 42nd Streets and Fifth and Sixth Avenues. Click on any picture (all of which were taken with my phone!) to see a bigger view.