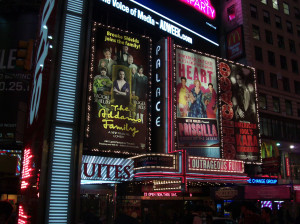 Watching the Hugh Jackman-led Tony Awards last night, along with dazzling performances from this season’s biggest musicals, reminded me again of just how wonderful it is to take in a Broadway show.

I’ve always been a fan of musical theater but was blown away at my first Broadway production, which was a performance in 2005 of the musical “Dirty Rotten Scoundrels” with John Lithgow and a crazy talented song-and-dance man I’ve become a HUGE fan of named Norbert Leo Butz.

Wowza! This was a huge production with a giant stage but I was surprised that the theater seating itself wasn’t that big. I was only able to get seats on the very back row and so brought along my binoculars. But they definitely weren’t needed! I had no idea back then that many of the Broadway theaters actually provide a pretty intimate setting to watch stars and other lead performers. 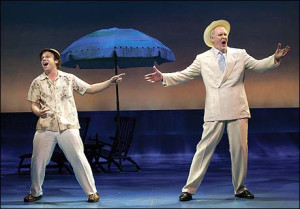 By the way, Mr. Butz went on to win his first Tony for this role – and I was yelling and clapping in agreement when watching the broadcast from my home.

He won again in 2011 for “Catch Me If You Can,” which you can see in the video below. Just fast-forward to the 1:03 mark to see some truly remarkable dancing from someone whose lower half seems completely independent of his top half. It really is pretty wonderful!

Since that first show, I’ve seen quite a few other Broadway productions but there have been 2 that especially stand out. In 2011, I was able to see “How to Succeed in Business Without Really Trying,” which garnered a Tony for its co-lead John Larroquette. And he was wonderful and soooo funny, as you’d expect.

But I was really surprised by the performance of the other co-lead, Daniel Radcliffe. 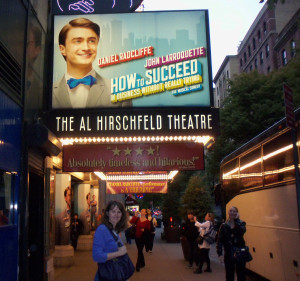 Daniel Radcliffe and me, sort of!

I’m a big Harry Potter fan, so I was excited to see him live, but I was blown away by his dance moves – especially the super intricate parts during the “Brotherhood of Men” song, which is shown below. I’m exhausted just watching it! (Again fast-forward, this time to the 1:58 point)

My other favorite memory is from the play, “Gore Vidal’s The Best Man.” It starred John Larroquette again, as well as John Stamos, Cybill Shepherd, Kristin Davis, and Elizabeth Ashley. But I actually went for another featured actor – Darth Vader himself, James Earl Jones. 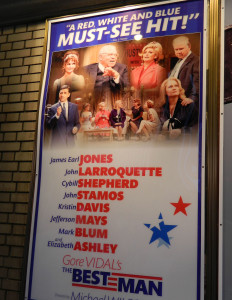 Yep, I wanted to be able to say I had heard that voice in person. And I was not disappointed. In fact, I still get goose bumps when I think about his first appearance on stage, the crowds’ crazily enthusiastic reaction as though he was some huge rock star, and then his first words that came booming out before he broke into a loud belly laugh. Talk about a perfect memory flash!

Of course I also enjoy just walking around the theaters at night every time I’m in New York City for a visit. The bright lights and crowds and huge flashing signs feel like some kind of frenetic yet magical 3-ring circus right out on the streets, and I love it! What can I say, “the lullaby of Broadway” gets me every time. 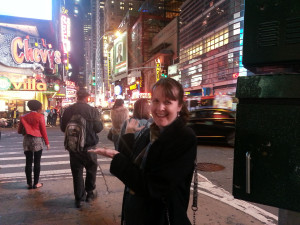 Back on Broadway last month!