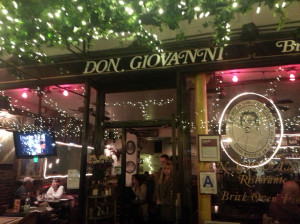 The Don Giovanni Restaurant on west 44th Street in New York City is my favorite type of eatery. It’s small and cute, feels “authentic” and has great food and service. Located between 8th and 9th Avenues just west of Times Square, it’s also one of those places tucked into a dim area where you might not expect such a fun, relaxing site. In other words, it feels like you’ve stumbled upon a hidden treasure!

However, the restaurant actually has quite a following – including the legendary singer Tony Bennett.

This past Sunday night, a small group of us were enjoying our wine and Italian food there (I’m in love with their lobster ravioli!) when our server mentioned that Mr. Bennett was dining with his own group of friends near the front door.

Okay, I didn’t actually eat at his table, but we were in the same room. So I’m classifying it is as dining together.

I didn’t want to disturb the long-time star while he was eating, but when he started posing for pictures with some of the wait staff afterwards, I ran over with my camera. Again, not wanting to be a pain, I stood behind the main photographer to snap a few shots. Of course I also leaned in to say, “I’m such a huge fan!” but he just said “Thanks” and turned away. 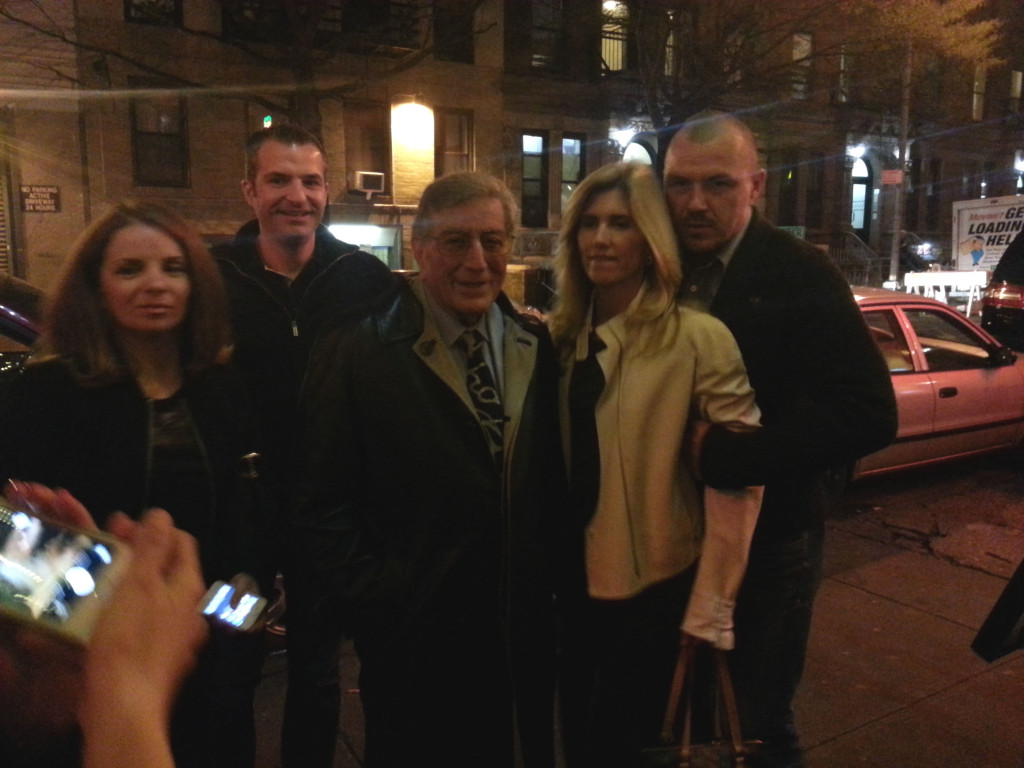 Tony Bennett and his group after eating at Don Giovanni’s

Still, I decided to count it as “after dinner conversation” with a living legend. Ha!

I learned from our server afterwards that Tony comes to the restaurant about once a month and that his group usually orders a “design your own pizza” for the table. And although they rarely order drinks, wine was enjoyed on our night. 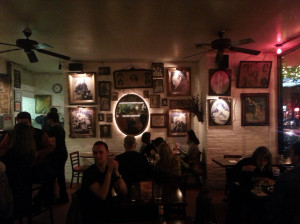 It’s easy to see why Don Giovanni’s is so popular. The food has great prices, especially by Manhattan standards, and the servings are big. According to its website, it prides itself on offering traditional Neopolitan dishes with warm hospitality unlike “the onslaught of pretentious Italian places in the area.”

The walls are lined with dozens of opera photos, as a salute to the restaurant’s name, and strings of white lights to keep the dining room from becoming too dark. 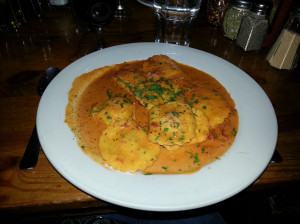 As mentioned earlier, I had the lobster ravioli on this visit as well as during a follow-up visit on our last night/Tuesday. Actually the full name was “Ravioli all Aragosta – Lobster Ravioli in Pink Sauce.” By any name, it was delicious! And was only $14 for a HUGE serving.

One of my colleagues ordered the restaurant’s signature brick oven pizza and voiced amazement that she almost finished it completely by herself. Her $9 Margherita pizza’s thin and crispy crust was especially tasty, as was her earlier super-fresh-tasting artichoke salad.

My only regret during our 2 dinners was that I never had any room left to try their tiramisu or chocolate chip cake. Well, and that I didn’t go ahead and ask for my picture WITH Tony Bennett. Oh well, maybe I’ll hit him up next time I’m in New York City. After all, I now know one of his hang-outs. 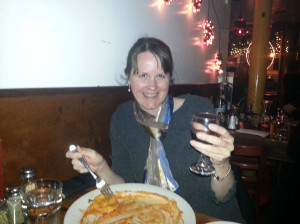 NOTE: The restaurant has a second location in Chelsea on 10th Avenue, in between 22nd and 23rd Streets. Reservations are only needed if a party has more than 6 members.