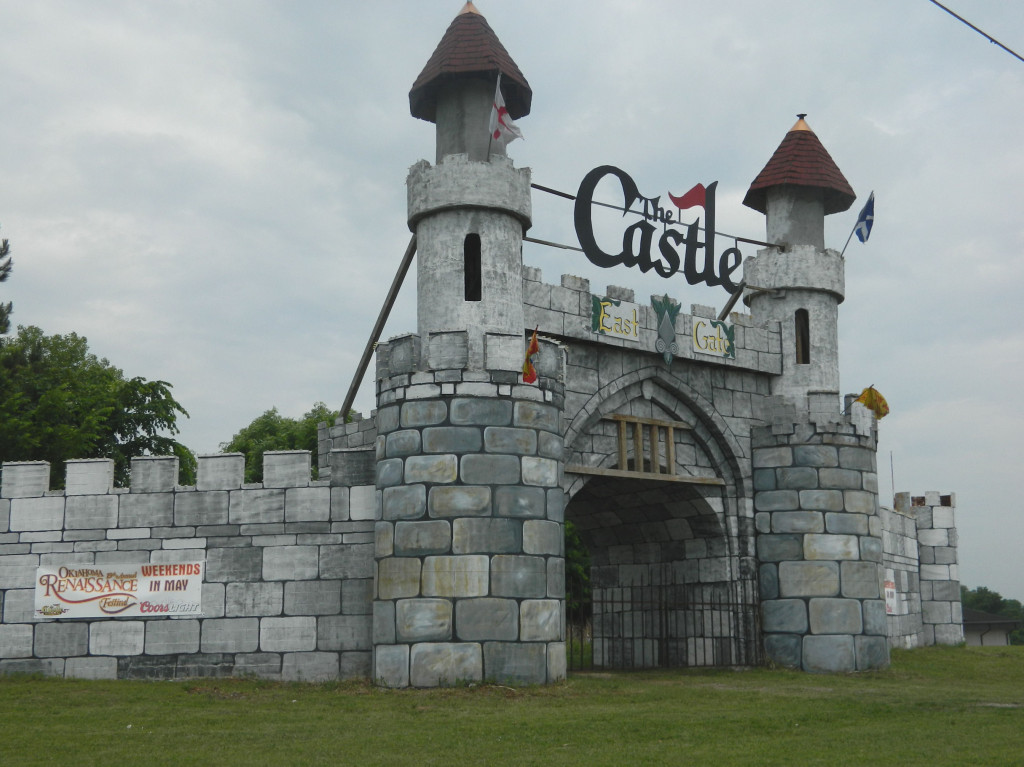 Even dark skies can’t keep us away!

Walking through the gates at the Castle in Muskogee, Oklahoma during its annual Renaissance Festival truly feels like stepping back into a long ago era. As far as the eye can see, costumed cast members man food and crafts booths, entertain with song and/or musical instruments, and roam around while interacting with guests, often whom are in period costume themselves. 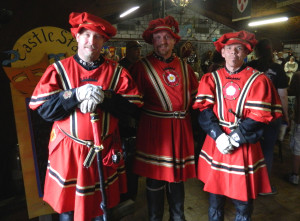 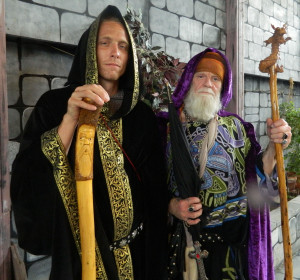 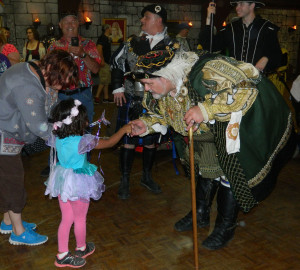 The King and a young admirer

I’ve attended several “Ren Fairs” over the years, but the one at Muskogee is one of my favorites. Guests and staff alike come ready to play, good-naturedly talking with or shouting funny insults at each other – all while never breaking character. 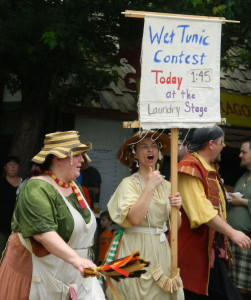 As for entertainment, there are tons of juggling, magician, acrobat, birds-of-prey, comedy, pet, and musical productions put on throughout the day at 15 different stages peppered throughout the wooded grounds of “Castleton.” This year also featured a show at the “Mermaid Grotto.”

Plus, the Royal Parade is always a delight… 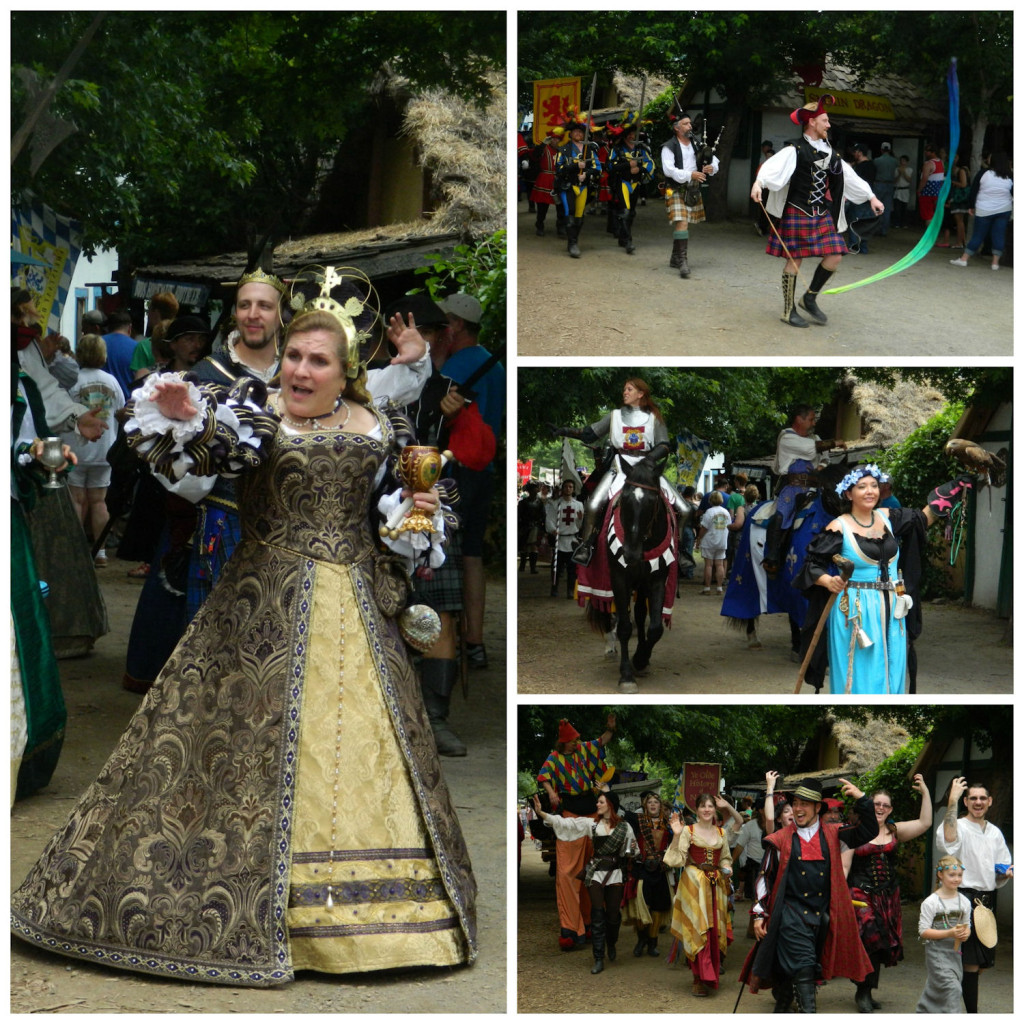 The Royal Parade, including the Queen herself 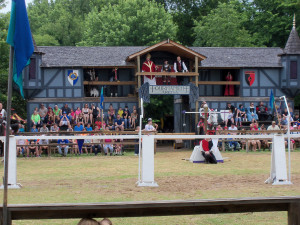 But my favorite part this time (and the last time I came 4 years ago) was the live jousting shows at the large, cheering crowd-filled arena.

On the drive over to attend on Saturday, I was a little nervous about the weather and… it did what it threatened to do, pouring down a drenching rain an hour after we got there.

However, after we ate lunch and caught some shows inside the castle structure itself, the rain stopped long enough to let the jousting program proceed as planned. 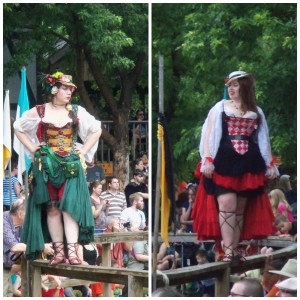 “Arena Wenches,” standing on the guardrails to rally the crowd

Like last time, my favorite knight was there and ready to perform. With a quick wit and smile, a beautiful horse, and deadly precision on the pre-event obstacle course, Sir Thomas definitely had me cheering for him against the equally talented Sir Richard. 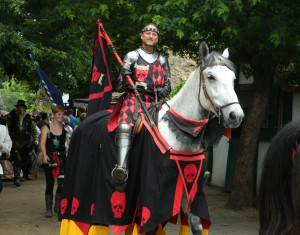 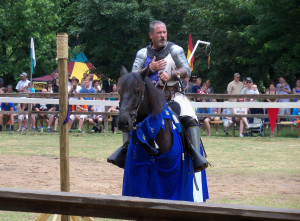 And Sir Richard, the Brave

After both men promised those in the royal box that this would be a friendly demonstration with no blood shed, the joust began. During the first 2 passes, the tips of the lances bumped. But they were crushed during the last pass. 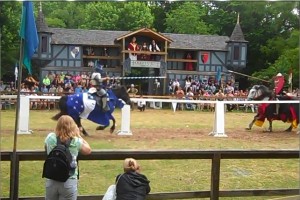 Alas, after the court ruled that it was a draw, the 2 men got into a fist fight, rolling through the course fence and vowing vengeance on each other. The whole thing ended with the proclamation that there would be a “joust to the death” later in the day and all parties rode off to the sounds of horns decreeing that it would be so. In other words, it was a jolly good show!

Here’s a short clip I took during the event…

Another fun part of the day was meeting the Festival’s King Francis I. Although after I asked for his picture, he did get a little frisky. Ha! 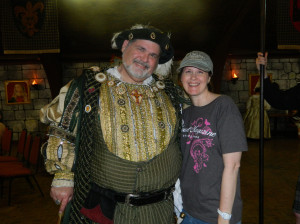 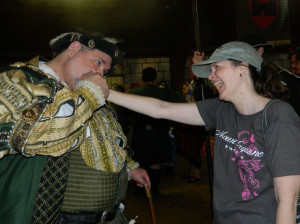 He actually rubbed my hand on his beard! *blushing*

Overall, this was a super fun and very immersive day. While eating, a costumed performer asked to sit at our table and then proceeded to entertain us with story after story in between taking bites of his lunch.

And while resting on a bench, my Dad was kept amused by the constant shout outs by a nearby pickle vendor. Amongst other things, he promised that his strawberry infused pickles could make skin softer and that his pickled eggs were actually Targaryen dragon eggs from Game of Thrones lore.

Even on our way out, I saw two young men get talked into participating in a “Scottish bellydance,” saw a magician change a small pebble into a large crystal marble for a young teen, and I got into a semi-serious conversation with a rather dapper-looking gentleman with a large feather in his cap over whether “kerfuffle” was a better, more dignified word than “chaos” or “commotion.”

Although I went home a bit damp and muddy from the rain, it was definitely worth it – as were my sore sides from all the laughter! The Fair continues through next weekend, so if you have a chance, it really is worth stopping by. Just make sure you go in ready for a good time! 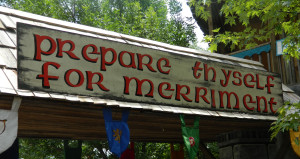