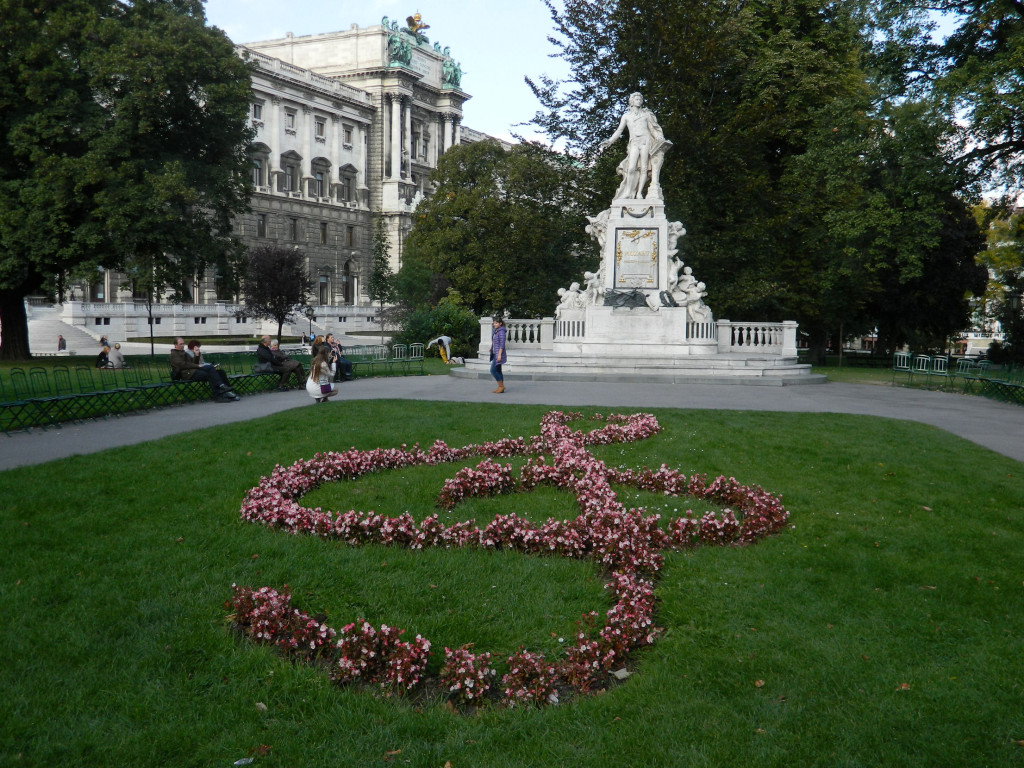 Vienna, Austria is like an elegant, beautifully adorned grande dame of European cities. Its wide streets lined with intricately designed buildings, green spaces, and lavish sculptures, plus a truly impressive list of great artists and composers that are still celebrated, make this locale a fantastic one to check out.

There are many famous as well as hidden treasures tucked around the city, but here are 5 that are among my favorites:

1. Royal Homes
The word palatial should have been created for the sprawling, light yellow Schönbrunn Palace, located on the outskirts of Vienna (and easily accessible by the metro). 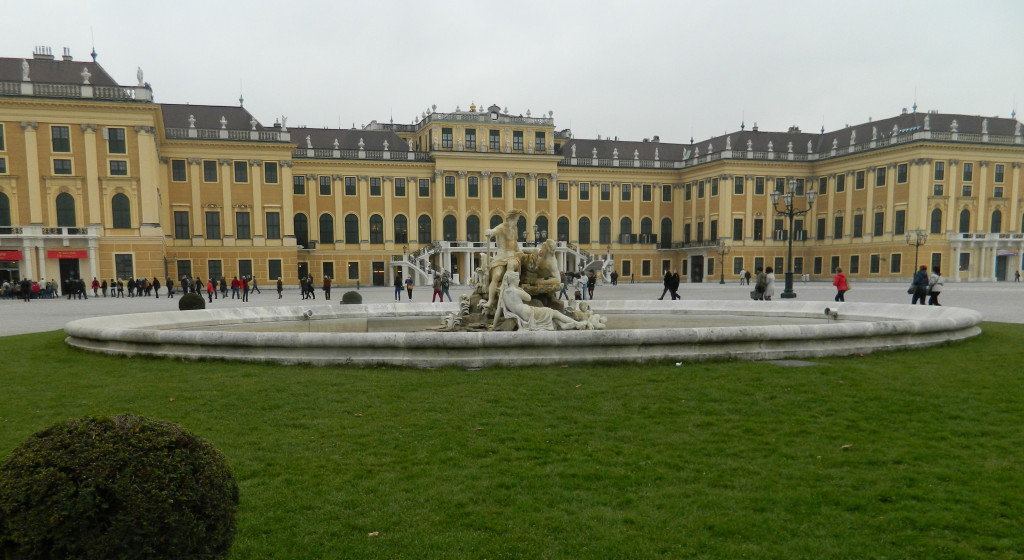 I could live here!

Commissioned in the 17th century and finished under Empress Maria Theresa, this summer residence for the royals is simply stunning. In fact, Schönbrunn means “beautiful spring.” Guided or recorded audio tours include most of the palace’s opulent rooms, including a grand ball room, bed chambers, private dining rooms, and the study of Emperor Franz Joseph – who was married to the universally loved Elisabeth, popularly known as Sisi.

You can also visit the room where a 6-year-old Mozart played one of his first public concerts.

No matter what the weather (and it was rainy when we were there), definitely make time to wander around the glorious gardens that surround the palace. In addition to the flowers, tree-covered paths, and fountains, it also houses the Vienna Zoo, which was founded back in 1752.

Such a nice panda 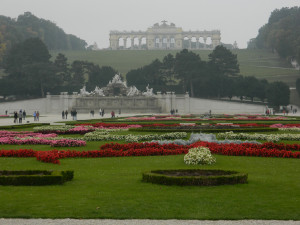 Or if you’re feeling especially energetic, climb the steep and winding path up to the Gloriette for truly unforgettable views.

It’s also worth checking out the city residence for the Habsburg dynasty. The Hofburg Palace is equally as impressive, if less colorful, than the Schönbrunn and currently houses the President of Austria.

Guided tours are provided here of the imperial apartments and the Sisi Museum. The grounds also include the Gothic Imperial Chapel, where the Vienna Boys’ Choir performs, and the Spanish Riding School, which includes shows by the famous Lipizzan horses.

2. The Vienna State Opera
This huge building is located right in the middle of the city center and in front of the popular pedestrian mall. Based on its locale, it’s a great meet up spot with fellow travelers, bus tours, and vendors hawking all types of crazy things. 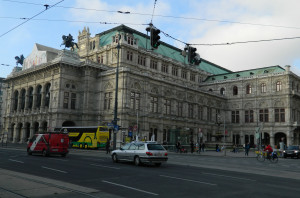 But the interior of the Vienna Opera House is a refreshingly calm, albeit lavish, respite from the fun but chaotic outdoor antics. Be sure to book a 40-minute guided tour for views of the main foyer, Marble Hall, auditorium, and even back behind the stage. Not bad for just a $9 ticket! 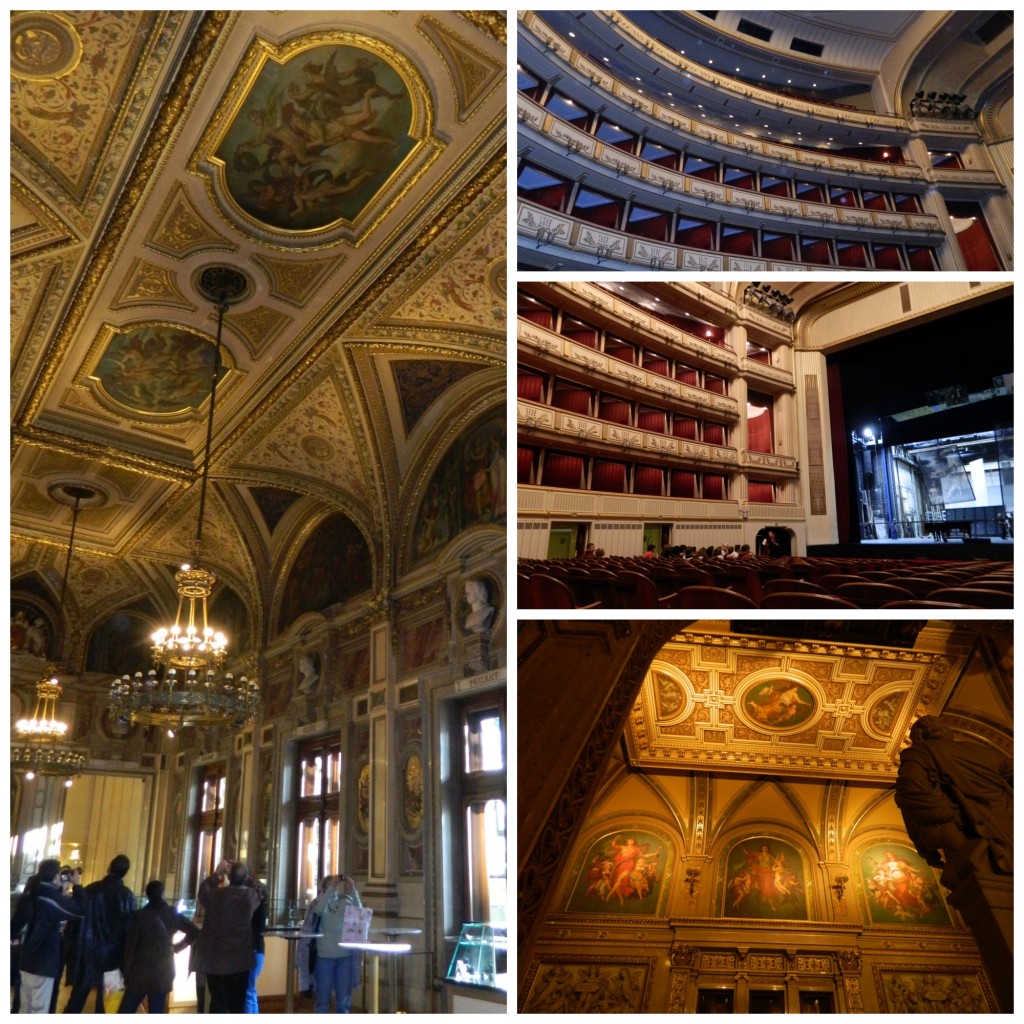 Interior shots at the Opera House, including box seats in the top pic and the stage in the middle pic

3. The famous Sacher-Torte
This very dense but moist dark chocolate dessert was first created in 1832 for Prince Wenzel von Metternich of Vienna. Although both the Hotel Sacher and the Demel bakery lay claim to the Sacher-Torte, I was only able to try the offering from the first and cannot recommend it highly enough. Wowza! 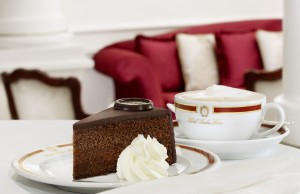 Sacher-Torte, courtesy of the Hotel Sacher

I previously wrote in detail about this bit of chocolate decadence, but suffice it to say: if you ever get the chance, GET ONE! Or better yet, get two. One to enjoy immediately and one to savor later. I’m seriously looking into the costs of ordering one (or two!) from the company now that I’m back in the States. YUM!!

4. Mozart and Chocolate
My love of chocolate carried on with my introduction to Mozartkugeln, which literally means Mozart ball or Mozart bonbon. This candy was first created in Salzburg in 1890 but has branched out to all areas of Austria.

The original recipe for each individually wrapped piece calls for “a ball of green pistachio marzipan covered in a layer of nougat” or praline cream and then dunked in a dark chocolate coating. Some places make a few variations on this, but most pretty much follow the recipe. 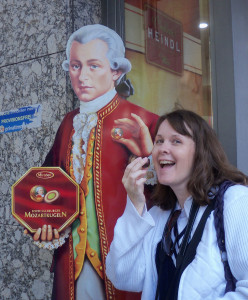 Seriously, you can’t eat just one!

All I can say is: these things are addictive! Thank goodness for the individual wrapping – I think that’s the only thing that kept me from trying to eat 5 or so at a time. By the way, unbeknownst to me, my Mom bought an extra box of these and hid them away until the holidays, when they appeared like magic in the family’s Christmas stockings. What a fantastic treat from my Mom!

5. The Giant Ferris Wheel
The Wiener Riesenrad (“Viennese giant wheel”), is a Ferris wheel that stands 212 feet tall at the entrance to the Prater amusement park. As someone who has published many ride reviews, I was incredibly excited to try this – even if it was built back in 1897! 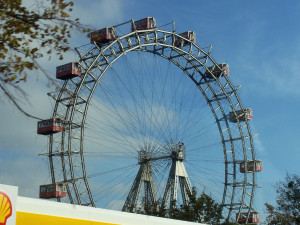 The Riesenrad has 30 completely enclosed gondolas, which look like individual train cars. Inside, there are windows on each side and a bench in the middle. And although the ride is very high, it is also very slow. So anyone can take advantage of its spectacular revolving city views. 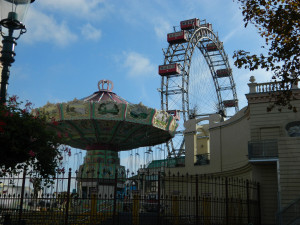 The big Ferris wheel during the day… 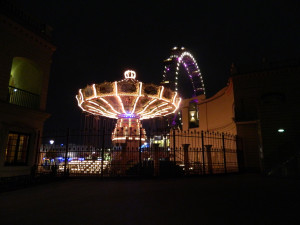 And at night when we rode it.

In fact, the night we went, we actually saw a couple having a beautifully laid out sit-down dinner in one of the gondolas. We couldn’t see if the young man was proposing, but the 5 of us in our car were cheering him on anyway. 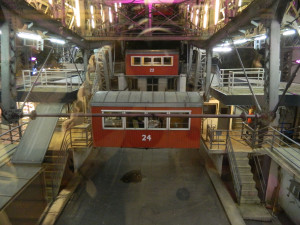 By the way, this ride can be seen in the 1949 Orson Welles film The Third Man, the 1987 James Bond film The Living Daylights, and the 1995 film Before Sunrise, with Ethan Hawke and Julie Delpy.

And that’s my top 5! But stay tuned, I’ll be writing about more great finds in the Vienna area all this week.